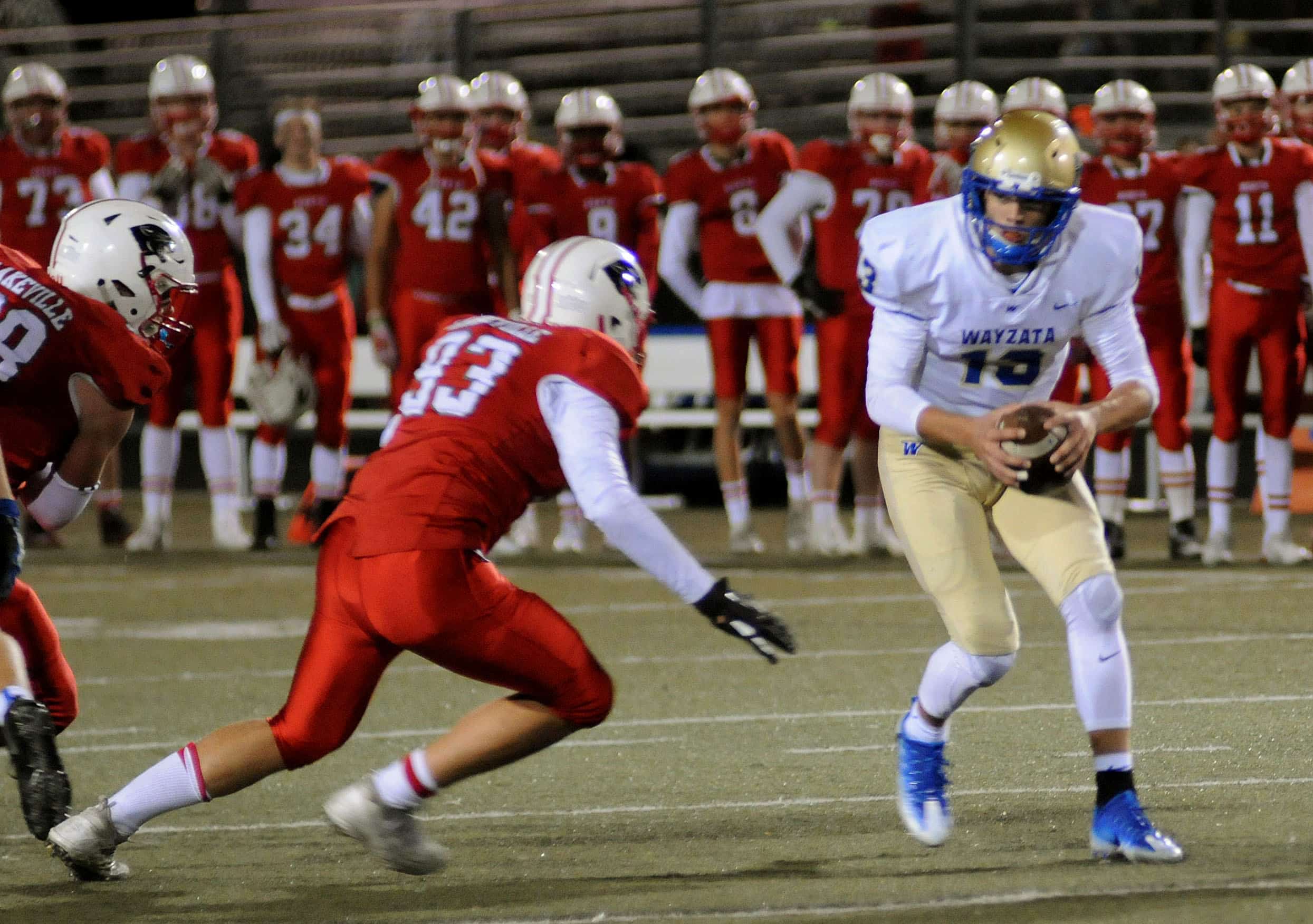 Korpela has been the Cardinals best defender the past two seasons, even after being sidelined earlier this year because he had his tonsils removed. The 6-foot-1, 190-pounder will need to be at his best on Thursday against Alex Folz and Spring Grove’s high-flying offense. Korpela has also taken on a larger role on offense this season, leading the team in yards and second in touchdowns behind Cameron Cahoon.

Hagen and his Blooming Prairie teammates deserve a ton of credit for advancing to the state semifinals after starting quarterback Seth Peterson suffered a season-ending injury in the team’s regular season finale.

Hagen’s playmaking ability is a big reason backup quarterback Kaden Thomas hasn’t missed a beat. The senior has 1,070 receiving yards – third-best in Class A according to stats listed on MNFootballHub.com – along with 17 touchdowns. Defensively, he’s been an integral part of the Awesome Blossoms front seven with 54 tackles and an interception.

Snobl is Bryan Strand’s Swiss Army knife. He punts and returns kickoffs on special teams. He can play quarterback, running back or tight end on offense, and he’s one of the Trojans top tacklers on defense. The senior is a three-year starter for the Trojans, which have advanced to the state semifinals two of the past three seasons. They’ve yet to make a Prep Bowl during this run, however, which is something Snobl and the rest of the team hope to change against Minneapolis North on Friday.

Myren made critical plays down the stretch of the Cardinals 27-21 win over Cannon Falls last weekend. He’ll need to do the same against a talented Perham team on Saturday. One of the senior’s strongest points this season is consistency. Myren has totaled at least 175 yards of offense in every game this season, while also combining for at least two touchdowns. He has thrown eight interceptions, however, which is something to keep an eye on at U.S. Bank Stadium.

The 6-foot-4 senior has the Cardinals on the cusp of their first state championship appearance since 1973. Dirksen showed some promise when he got the chance to start the final five games of last season, but with almost 3,100 total yards and 42 touchdowns, he’s been the breakout quarterback in Class AAAA this season. He’s also got one of the strongest arms in the level too, if not the entire state.

Gefre is the leading tackler on the Owatonna defense, which is surrendering 14.5 points per game this fall. He’ll need to be sound against Elk River on Friday, along with the rest of the Huskies front seven.

The Huskies seemed to have cracked the Elk River offensive riddle, though, holding the Elks to just 45 points and 623 yards in state tournament matchups the past two seasons. That’s well below their averages against the rest of the competition, but can Jeff Williams’ defense do it for a third-consecutive season?

Blaine is going to have to match Eden Prairie’s physicality on the offensive and defensive lines. That’s where the 6-foot-4, 255-pound senior enters the conversation. Becker has been a one-man wrecking crew at times this season, including last week against Eastview. He posted three tackles and two sacks against the Lightning, altering their offensive attack early in the game along with Hakeem Sidibe. Becker leads the Bengals with seven sacks.

The Rangers have quietly been one of the top defenses in 9-Man, surrendering just 11.8 points per game. They’re led by senior Vincent Benkusky (117 tackles, 3 FR, 2 INT) and junior defensive end Dillon Drake (99 tackles, 4 FR). Can the Rangers D keep the Wolverines rushing attack in check on the turf at U.S. Bank Stadium?

Springfield Pass O vs Mahnomen-Waubun Pass D
The Tigers are the surprise team still alive in Class A. They finished 4-4 in the regular-season, but rattled off four-straight wins to reach U.S. Bank Stadium. Most of their success on offense comes through the air. Quarterback Decker Scheffler has thrown for 2,308 yards and 24 touchdowns. His favorite target is senior Isaac Fink, who’s caught 63 passes for 1,118 yards and 16 scores.

The Thunderbirds are the top defense in Class A, allowing just 123 yards and 5.5 points per game, although they haven’t faced many teams passing games like Springfield. Mahnomen-Waubun has only defensed 166 passing attempts the entire season, but somehow has recorded 13 interceptions. Parker Syverson leads the team with seven picks, while Will Bly has chipped in three.

Paynesville RB/WR vs Caledonia LB/DB
If Paynesville is going to shock Caledonia, the Bulldogs are going to have to put points on the scoreboard, early and often. In last year’s semifinal they trailed by 21 after the opening quarter, which is a recipe for disaster against the three-time defending champs.

Getting the ball to Zach Schroeder has to be a priority. Schroeder is a game-changer with the ball in his hands at both running back and receiver. He’s rushed for 1,267 yards and 15 scores this season, but also has the ability to be effective in the passing game, although quarterback Max Weidner is likely out after suffering an injury last week.

Carl Fruechte’s defense is fast and furious like usual. The Warriors first-team has allowed just 59 points this season, playing in the fourth quarter in fewer than half of their contests. Nick McCabe is one of the team’s top tacklers at linebacker, while Tate Meiners provides athleticism in the secondary. It will likely be Meiners who matches up with Schroeder on Thursday afternoon as the Warriors go for win No. 53 in a row.

No. 1 vs No. 2. Two unbeaten teams. Two physical offenses. Two dominant defenses…and a little state semifinal history between the programs too.

Pierz has shown more explosiveness on offense than the Eagles. The Pioneers, led by running back Reese Kapsner, have scored 42 or more points in all but two of their contests, including last week’s 60-12 drubbing of Annandale.

Lourdes counters with a defense that’s held opponents scoreless in the past eight quarters, including high-flying Jordan in the quarterfinals. The Eagles have four total shutouts on the season. Mike Kesler’s defense is paced by linebackers Jake Groteboer and Andrew Peine, along with defensive back Pat Leary.

No. 1 Pierz and No. 2 Rochester Lourdes have combined to win the last four Class AAA titles. (Photo by Paul Middlestaedt)

Waseca Rush O vs SMB Rush D
The Bluejays have been unstoppable since their Week 5 loss to Marshall, scoring at least 41 points in every game of their six-game winning streak. It’s mostly because of a dominant rushing attack that’s caught fire in the last few weeks. Quarterback Hunter Rodriguez is the team’s leading rusher, but in the state quarterfinal win over Winona it was senior Joe Hagen with a 250-yard, five-touchdown performance.

The Wolfpack defense will be one of the best that Brad Wendland’s team has faced this season. They’ve surrendered just 9.4 points per game, holding every opponent to 15 points or less during their unbeaten campaign. Andrew Mollison and Kevvan Anderson are difficult to block one-on-one, allowing linebackers Bennett Theisen and Kaden Johnson to free flow to the ball. Both Theisen and Johnson are among SMB’s leaders in tackles and sacks.

Bemidji Rush O vs St. Thomas Academy Rush D
The Cadets, on the strength of Class AAAAA’s top defense, have won all of their 11 contests by at least 18 points. They’ve shutout five opponents. They’ve not allowed a single team to score more than 14 points. Linebackers Ben Reppenhagen and Luke Herzog are two of the most active players in the front seven, but senior d-lineman Jason Samec is the anchor of the entire unit.

It’s going to be a tall order for Bemidji to score 20 or more points, but leaning on their running game will be a good place to start. Caleb Grant has rushed for 1,286 yards and 12 touchdowns, while sophomore James Williams is averaging over eight yards per carry with 15 scores. Bemidji pounded out a quarterfinal win over Cambridge-Isanti in the snow, as Grant (141 yards, TD) and Williams (71 yards, 4 TD) ran past the Bluejackets in about two-and-a-half quarters of action.

Not one of St. Thomas Academy’s opponents has been able to establish a running game. Can the Lumberjacks buck that trend on Saturday night?

Lakeville South OL vs Lakeville North DL
The first meeting between the Cougars and Panthers was a 28-3 North victory, although the game was very tight until Brian Vossen’s squad pulled away in the fourth quarter.

North did a great job against South’s T-formation offense in that meeting, holding the Cougars to just 136 yards rushing and a 2.6 yards-per-carry average. Executing against the North front is still going to be challenging. Eli and Will Mostaert, who are both committed to North Dakota State, anchor the state’s best defensive front. Junior Landon Carter has also had a great year in his first full season as a starter with 51 tackles.

You’d have to figure the South offensive line remembers being outplayed in that contest. Juniors Kyle Lattery and Mason Coons are the most impressive on film, and both have continued to improve since that first meeting.