This story will be an extension to my earlier ’Hidden Gems’ installment. I will highlight some key players from the games I have covered this season that may not catch the eyes of college teams. Also give some more recognition to some teams who may not have made a deep playoff run. Now many of these teams I only covered once so just because their names are not mentioned here, does not mean they are not good players.

#5 *Alex Saltzer- Saltzer was a great deep threat on offense. He runs his route hard and can get behind the defense in a hurry, making opposing defenses respect the pass more.

#10 *Logan Sussner- Sussner opened up the game with a big hit on a run to the perimeter. Shows he can keep contain from the end position and makes the play when the opportunity comes. He also was a good blocker for the run, but can be a good pass-catcher.

#13 *Cole Sanow- Sanow was a focal point for the Vikings this season, he runs the ball really hard and dishes out a lot of contact. On defense, he seems to know his role, reads the offense well, and most importantly makes the play.

#20 AJ Myhre- Myhre made a lot of good plays in the secondary, with both coverages and open-field tackles. He will more than likely receive a larger role next season.

#52 Jacob Citterman- Citterman made a lot of good plays defensively and was a good blocker for the pass and run game.

#55 Beau Bannish- Bannish was also a good blocker making seams for the run game and leaving time for the passing game.

#12 Kade Lozinski- Lozinski stepped in at Quarterback and made some great throws for a big game in his first start.

#1 *Sawyer Otto- Otto had a good game running the read-option. He is a good runner and has great vision, can also throw a good ball.

#7 Konnor Zick- Zick was impressive with some open field tackles, and was a good runner in offense.

#9 Jake Tauer- Tauer seemed to be a good secondary receiver with some longer routes when the team needed the yards.

#16 Lucas Gervais- Gervais was a good red zone threat with his height and jumping ability, had some sneaky speed too.

#52 *Tyler Timm- Timm was the anchor on both the offensive and defensive line.

#71 *Trevor Eisfeld- Eisfeld was the field general, racked up the tackles defensively while being the other anchor on the offensive line, while also returning kicks.

#22 Ayden Horner- Horner is a real shifty back and has plenty of break away speed.

#54 Tony Nelson- Nelson has good size and power at the tackle position and defensive end.

#1 *Evan Mann- Mann had to adjust to a new playbook for his final season, but played it like a veteran. He delivered a good ball down the field, and ran the read-option effectively.

#11 *Tristan Jones- Jones was the primary target, catching a lot of balls that were thrown to him. He found his way into open field and made moves when he got the ball.

#9 Jacob VonTersch- VonTersch was great in coverage against some really athletic receivers.

#10 Matt Sehr- Sehr became a good target for both quarterbacks throwing to him throughout the season.

#22 Nick Feit- Feit was a good punt returner and a good tackler, was a linebacker/safety hybrid type player.

#47 Ishaiah Bartels- Barthels was a good receiver with a good frame for his quarterbacks.

#63 Nathan Nekali- Nekali was a good blocker and held the line on defense.

#2 Bailey Cowell- Cowell was the athlete for the team, started the season at quarterback and slid out to receiver to be another playmaker for them in the pass game.

#4 LaShad Smith- Smith was the primary runner of the team, was very shifty and had the speed for big plays.

#70 Zach Ahrendt Zach Ahrendt OL Luverne | 2021 State MN – Ahrendt drew a lot of the double-teams from the opposing offensive line because he messed with the offense with the one-on-ones. Offensively played the center position tough gave a lot of time to throw.

#4* Payton Hess- Hess was the all-around athlete for the Knights, starting the season at wide receiver, then flipping to quarterback which sparked a win streak for the Knights boosting their playoff seed. He’s got the speed and agility while also showing off an arm. Defensively played well in the secondary.

#55 *Kyle Fischer- Fischer played well on the defensive line, really disrupting the run game. Offensively did the exact opposite, sparked the run game.

#24 Korbyn Sitzmann- Sitzmann really flew all over the field out of the linebacker position.

#26 Tim Gilmore- Gilmore also played really well defensively had a had in on many tackles.

#69 Connor Kremin- Kremin also disrupted many offensive plays on both the pass and run game, and blocked exceptionally well.

#1 Darrick Baartman- Baartman runs some good routes and has a nice set of hands.

#12 Jonah Christensen- Christensen was a great target with good height and speed and did not miss a ball when thrown to him.

#16 Hayden Gravley- made a huge impact on the offense, collecting a lot of the targets throughout the season and catching most of them.

#2 *Tyler Sayre- Sayre was the speed receiver, ran good routes to get space and racked up yards after the catch.

#9 *Parker Viessman- Viessman commanded the offense pretty well, made some pretty good reads on the defense.

#22 ^Cameron Anderson- Anderson was hurt most the season but came back and ran hard while dishing out contact.

#28 *Brayden Gravdal- Gravdal was in on almost every tackle in the end of the season, constantly finding the ball.

#53 ^Dylan Bruns- Bruns was great on the defensive line, played much bigger than his size.

#12 Tanner Drietz- was a reliable target and playmaker.

#56 ^Shane Noyes- Noyes also had his hand in on many tackles.

#3 ^Ty Stoks- ran out of the backfield well with speed and power.

#13 Caden Baarts- Baarts was a playmaker both running and catching out of the backfield, while locking down the other teams best receiver.

#55 Jacob Rahn- Rahn held his blocks until the whistle and had endless pressure on the opposing quarterback.

#9 Zach Jorgenson Zach Jorgenson 6'3" | QB Fairmont | 2022 State MN – Jorgenson played really well in a pro-style offense, has a really good arm, both on the run and in the pocket.

#23 Gavin Rodning- Rodning was a good ground-and-pound runner was not easy to bring down.

#3 *Bryant Haas- Haas was a good runner and passer for the offense, kept the game at a high-tempo.

#24 Carter Guetter- Guetter was a good threat out of tight end and had good coverage.

#26 Jordan Mertens- Mertens was good in pass coverage and a good receiver.

#28 *Adam Bommersbach- Bommersbach was a good runner for the offense, ran over many defenders. Defensively tackled well.

#55 Kaleb Haase- Haase was part of a good duo on the offensive and defensive line really made life hard for the opponents.

#61 Chad Maddock- Maddock was the other part of the duo, drew a lot of double teams freeing his teammates and made plays when he wasn’t doubled.

#12 Connor Josephson- Josephson was a good vertical threat and was very reliable.

#33 Carter Johnson- Johnson was a good focal point on each side, running hard on offense and tackling well on defense.

#1* Raine Stade- Stade was a good receiver and a good perimeter defender.

#3 *Wyatt Geistfeld- Geistfeld has a good arm and was pretty mobile. He was able to make some good decisions in important times.

#6 Connor Simmonds- Simmonds became a really good tackler in the secondary, while also being a good target.

#7 Payton Anderson- Anderson was a very physical runner, was also a good defender in the open field.

#25 Derek Dunlop- Dunlop became a consistent target, making a lot of catches late in the season.

#42 Miles Fitzgerald- Fitzgerald became a really good defender making many tackles and being great in coverage.

#43 Jaxson Rohman- Rohman has a high motor that does not stop, runs hard and gains positive yardage when he touches the ball.

#2^ Parker Hoffman- Hoffman was a good receiver for both possession and speed.

#5 Aaron Loe- Loe did a good job controlling his offense and trying to keep them going forward either passing or running.

#10 *Carter Louwagie- Louwagie was also a physical runner, but could break away for big gains as well. He was tough to block and made tackles on defense.

#14 *Rilee Olson- Olson tracked the ball and found the ballcarrier for many tackles.

#20 *Brock Kvistad- Kvistad played hard on defense, was tight in coverage and made a lot of tackles out of the corner position.

#3 Romell Horton- Horton has lots of speed to be a great vertical threat and a good set of hands, also good in coverage.

#4 Josh Anyasike- Anyasike is physical on both sides of the ball, but also has great speed and agility.

#51 *Slade Irvine- Irvine was a good blocker, also kept contain and made tackles on the perimeter of the line.

#55 *Austin Moen- Moen was the pull blocker to run behind, also forced his way in the backfield on defense.

#2 ^Dean Porchardt- was a good runner out of the backfield in the misdirection offense, has lots of speed but will be physical.

#6 Konnor Aufenthie- Aufenthie played great throwing the ball to his many targets and could also make plays with his feet. 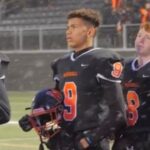 #25 *Gabe Raini- Raini reads his blocks really well, has some speed and is physical in the red zone.

#75 *Jackson Vierstrate- Vierstrate has lots of power, hard to get off his block while also hard to block on the other side.

Some obvious players I may have missed have already committed to colleges or have plenty of offers already. Some teams that I have covered that I did not mention have made State and I will be doing a story on them later.