Wrestling and football mix together like Tom Brady and Bill Belichick, lemonade and ice tea, and sitting on the porch and a nice summer day; they just make each other better. I can attest to this both from personal experience and historical analysis. After joining my high school wrestling team my freshman year – which led to a long four-year relationship with the sport – my tackling, blocking, and block defeat all got noticeably better the following summer during the start of my sophomore season. I credit wrestling with a lot of technical success in football, but the mindset wrestling gave me as a competitor overall was an even more useful tool. Looking back on the last decade of state champions in Minnesota on the wrestling mat, the AAA, AA, and A divisions of the sport are littered with champions who excelled on both the mat and the gridiron as a prep, and became similarly successful at one of the sports in college. Some of these AAA champions include Wade Sullivan (Lakeville North->UMD football), Bryce Benhart 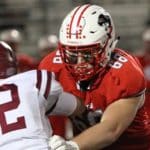 Bryce Benhart OL Lakeville North | 2019 State MN (Lakeville North->Nebraska football), Alex Hart (Prior Lake->New Mexico football), Colin Fisher (Eagan->SJU football), and Andrew Piehl (Rogers->Naval Academy wrestling), but there are hundred more football studs that, despite not winning a state championship, have competed for and earned tons of prep accolades and successes. In today’s special feature for Northstar Football News, we will examine some of the 2019-2020 most competitive AAA wrestlers who fly around on Friday nights for their high school football squads. I hope you enjoy! *note: these lists are based off of The Guillotine’s February 6th rankings, as well as accolades awarded/film available in either sport for the selections.

Austin Litke (Little Falls) Section 8. C/o ‘22. Ranked #10. Listed as a RB and wearing the #5 for the Flyers according to MNFootballHub & Maxpreps. He does not have a Hudl, but has more than 100 wins on the mat already and was an All-Area pick as a wrestler last year.

As of 3 days ago, Aho has a 29-8 record for the Rangers as a freshman 113 pounder. He played CB/RB on the freshman squad last fall and has five games worth of Hudl up. 9th Grade Squad vs. Coon Rapids

On the gridiron, Hanson has a history of Hudl profiles for Lakeville North in 6th, 7th, and 8th grade, but unfortunately no freshman year film. As far as the wrestling mat, according to Trackwrestling from December 27th, 2019, he has a record of 97-11 with 32 pins and 30 majors. He was a very accomplished youth wrestler, and won a 14U 106 lb. folkstyle championship at UNI last April, and completed the “Triple Crown” but also winning the freestyle and Greco-Roman championships at his weight. If he can win a state title as a freshman this year, we may have a second-coming if Wade Sullivan on our hands!

It looks like Ban competed a little bit at the varsity level as a sophomore in 2019, and holds a 30-3 record this wrestling season and was selected to the StarTribune wrestling honor roll. He competed at the prestigious The Clash duel tournament in January with Anoka, and is making a good run to try and land on the podium in March.  Vs. Eagan High School

The Wayzata Trojan was listed on Wayzata’s Freshman Hudl roster but has no film. He placed second as an 8th grader at 113 pounds last fall in the Section 5 tournament, qualified for state, and finished with a 37-8 record. He’s ranked 4th as of right now at AAA 126 pounds.

Peters finished 5th last year at 126 pounds in the state tournament, and played a lot of varsity minutes for Mayo’s football team last fall as a DB. As a junior he will look to beat that 5th place finish in 2019. Owatonna Hudl

The senior was listed as a CB/OLB on South’s football Hudl from last fall, and is tagged in game recaps, but does not have his own film unfortunately. However, the 10th ranked 138 made the StarTribune wrestling honor roll a few days ago with a 29-7 record.

According to MNFootballHub the junior posted 20 tackles in 2019 as a DB for the Storm, and made the StarTribune wrestling honor roll a few days ago with a 31-3 record this season. He placed 5th last year at 132 pounds. He has four games of film on his Hudl profile. Chaska Hudl

One of the best wrestlers in the state for the class of 2020, the Iowa State Cyclone commit is in a tough 138 lb. class and is currently ranked #3 in the state with a 42-1 record. He played multiple positions for the Northfield Raider football team and has film from as recent as five months ago. Keep an eye on the senior as he makes a run for a state title in March. Mankato West Hudl 2016-17 wrestling highlights

After finishing 6th last season in the state tournament, Bischof is underrated in 2020 as he heads into tournament time on the wrestling mat. He has game film and is listed on Lakeville South’s football Hudl, and played in U.S. Bank Stadium last fall in the 6A state state semifinals. He’s ranked #9 at 145 currently. Wayzata Hudl

Mayo’s QB1 in 2019 has the most complete Hudl of any of the duel-sport athletes so far, and was a KTCC Athlete of the Week during last year’s football season. Somehow, the stud QB hasn’t qualified for state on the wrestling mat yet, and it’s safe to say he’s got a great chance of accomplishing that goal once sections comes around. Sheehan transferred from the Southland High School area to Rochester in 7th grade, and the move is looking like a good one. Good luck at sections, Cade!
Final Ride Hudl

The Farmington Tiger took fourth place at 145 lbs. as a junior during his third trip to the Xcel Energy Center for the state tournament, and is looking tough this year with a 31-2 record on a loaded Tiger wrestling squad which features multiple two-sport athletes. He had a great 2019 on the gridiron as well, and features a good Hudl tape. Look for him near the top of the podium this March. 2019 Highlights

The reigning 2019 AAA 152 lb.state champion became South’s third ever state champ and finished with a 41-3 record. He was also a steady feature in Lakeville South’s impressive rushing attack last fall that carried them to the state semifinals, and is looking to repeat as the 152 lb. best in the state in a month. 2019 Prior Lake Hudl

A OLB for the Mustangs state playoff qualifying team this past fall, Dunagan is killing it on the mat in 2019 as he placed third at the prestigious Christmas Tournament, notched his 100th victory, and is in a great position to beat his 29-12 regular season record last winter. Brendan’s Season 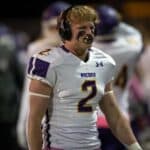 This kid is a flat out stud. As a freshman, McEnelly got significant varsity minutes on Waconia’s stacked 2019 team as a RB and OLB and was selected All-Conference for his efforts on the gridiron. he’s already a 2x All-Conference wrestler, and placed 2nd in the Minnesota Christmas Tournament this winter. Four days ago it was reported he reached 100 career wins on the mat as only a freshman, and has almost 40 wins this season with 19 coming by pin and 10 by technical fall. At the East Ridge Ruckus tournament last week, which featured heavy-hitters such as No. 2 ranked STMA, he cruised to any easy championship with bonus points scored in all matches and a tech fall over the state’s No.6 ranked wrestler to win OW of the tournament. He’s a beast with a 42-1 record and is only getting better.  Freshman SZN

The Woodbury Royal was a tank of a RB this past fall for the Metro-East competitor and has a 28-1 record in 2019 to go along with his #1 ranking at 182 lbs. which he has basically held all season. He placed 5th in 2018 at 145 pounds and has bulked up for his senior season. Check out his Hudl: The End of an Era

I got to watch Venz play last fall for the Farmington Tigers when they played Rosemount, and the linebacker rocking #55 is a good football player that unfortunately does not have any updated film on his Hudl. Although ranked at 182 lbs., he’s been wrestling at 195 most of the year and his weight cut could have signifiant impacts for better or worse on the juniors potential state tournament run. His brother, Taylor, is an absolute hammer on the mat and is currently wrestling for the Nebraska Cornhuskers in the B1G.

Listed on the Ponies Hudl roster as a 6’0, 205 lb. MLB/DE, the senior placed fifth at the state tournament last March is looking like a strong contender to win it all this year, with Shakopee opponent Joey Johnson the only wrestler consistently ranked above him this season. Stillwater placed second as a team last year and is looking for that elusive team title this winter as well.

Without a doubt the most accomplished football player listed so far, Minnesota’s #1 LB for the class of 2021 is a multiple time All-District and All-Conference awards to go along with 300 tackles thus far in his career. He is also the wrestler featured in for this article, and has well over 100 wins on the mat in his career as a Royal. He’s had football gameday visits to Iowa, Minnesota, UNI, USD, NDSU, Iowa State, and more so far. Junior SZN

A DL/OL trench warrior for the Orioles, Schack won the Chanhassen Open at 220 this year, recorded a 42 second pin against Rogers, placed 2nd at the East Ridge Ruckus where he lost to state champion and #1 ranked AA 220 lber. Danny Striggow Danny Striggow DL Orono | 2020 State MN – who is heading to play for PJ Fleck next fall. He is 26-4 on the year with 13 pins. Junior Year Highlights

The St. Cloud Tech product is heading to the University of Northern Iowa to play football next fall, but is leaving an imprint on the wrestling mat in his final season in a Tiger singlet. He won the traditionally tough Rumble on the Red tournament in North Dakota this January, which is a very tough tourney and a very impressive win. He’s got a heckuva senior highlight tape as well. Senior Season

The University of North Dakota football signee has a 30-3 record at the heavyweight division for AAA with two of those losses coming to the #1 ranked AAA 285 lber. Gavin Layton Gavin Layton 6'4" | OL Coon Rapids | 2021 State MN . The OG/DT is a stud on the mat and just won the East Ridge Ruckus tournament last Saturday with four pins. He’ll be a force come March for his fellow heavyweights. Senior Hudl

The 2020 DT was a force on the Lumberjack line last fall and is continuing his dominance onto the wrestling mat, where he is currently ranked #2 in a stacked heavyweight AAA weight class. The Lumberjacks recently had a duel with Waconia, and Smith edged #3 ranked 285 lber. Weber 3-2 to overtake him in The Guillotine’s state rankings. After qualifying for state last year, he has a real good shot to compete for a state title soon. Senior SZN Hudl

40-0. There’s not much more I need to say than that, as the Coon Rapids’ OT on the gridiron worked his butt off this past season to shock the state in his crazy junior season on the mat. He won the Rumble on the Red, the Christmas Tournament, and remains undefeated heading into sections. He’s a force, and should also be a highly ranked offensive lineman in the 2021 class next year. Junior Season