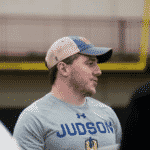 If you don’t know the name TJ McMillen yet, you soon will. He’s the son of St. Francis Head coach & arena football league legend Bob McMillen. The 6’3, 245-pound sophomore to be was a star last year on Wheaton St. Francis’ varsity squad. He was named All-Conference and All-Area as a Freshman! McMillen combines a tremendous first step, with shear strength to cause problems for offensive lineman. TJ is a high motor kid who often chases down plays from the backside once the ball is handed off. He moved around quite a bit in 2019, playing inside as a three-technique, a stand-up rush outside linebacker, but mainly as a defensive end on the outside. McMillen has great bend, which he often uses to dip low in his rip move to get past tackles. On the offensive side, he lined up as a center and just buried interior defensive lineman. He plays with good hand placement and finishes through the whistle. Bottom-line, this kid is a major Division 1 prospect. With his frame and ability, I think he’ll be one of the most highly recruited players in all of Illinois in the 2023 class.

McMillen has seen his recruiting ramp up the past few weeks. On Tuesday, he recently picked up his first Power-5 offer from the Syracuse Orange.

“It was one of the best ways to wake up to that 8:00 am phone call before starting school. I was very excited and honored to receive the offer. I know that I’m young and just starting this recruiting process, so that made this offer even more special.”

However, that’s not all. Multiple schools have reached out to him and expressed interest in the defensive end, including Iowa, Iowa State, Penn State, Louisville, Michigan, Northwestern, Arizona State, Wisconsin, Eastern Kentucky, Central Michigan, Minnesota, Notre Dame, Maryland, and Missouri. McMillen told us what exactly he’s looking for in a program.

“I’m looking for a program that will be a good fit for me. Many coaches have told me I could play either defensive end or defensive tackle or play Center. So for now, I am keeping an open mind as to where I project at the next level.”

This may be his first Power-5 offer, but I don’t think it’ll be his last. Don’t be shocked when other bigtime programs give him a free ride to school as well. TJ does have a dream school, but no favorites just yet.

“My dream school has always been Michigan and I really enjoyed my November visit there. Right now, I don’t have any favorites yet. I want to get to many of these campuses when possible and have more face to face conversations with these coaches before I can have favorites.”