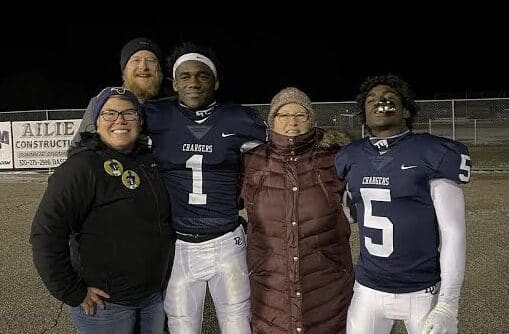 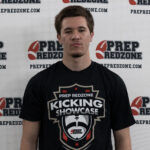 Like many of our readers, when I think of Thanksgiving I think of family. The entire holiday is really based around the idea of togetherness, unity, and love, so what better PrepRedzoneMN feature is there to present than one surrounding family within the high school football space in the great state of Minnesota. It’s very easy to recognize that football encompasses a lot of the same ideals as family, especially the aforementioned themes of togetherness, unity, and love, and nothing embodies this combination of family and football than siblings playing together or playing through the same high school football programs. In the spirit of Thanksgiving I have listed below some of Minnesota’s finest and most accomplished football families that I could think of off the top of my head, with an emphasis on brothers to play for the same high school team. Thanks for reading, Happy Thanksgiving, and be safe, everybody.

Logan and  Tristan Hoppe Tristan Hoppe 6'2" | LB Hutchinson | 2021 State MN  (Hutchinson) The Hutchinson Tigers duo are big boys – Tristan is 6’2, 230 and Logan is 6’4, 230 – and play defense for the Tigers primarily. Tristan is a 2021 LB who was recently named All-Metro and holds official offers from Dordt, UMary, Northern State, Concordia-Moorhead, St. John’s, and UW-River Falls. His younger brother is a c/o 2023 hammer who is going to be gaining the attention of a lot of college coaches in the near future.

Terry and  Drew Kittelson Drew Kittelson 6'4" | QB Blooming Prairie | 2022 State MN  (SMB) The Lockett boys are both WRs, with older brother Terry having signed with the Michigan State Spartans last year. Younger brother Ty is a 2022 at 4A powerhouse SMB. Both are shifty and explosive wideouts that bring a lot of speed to the outside.

Joshua, Jared, Jacob, and Justin Streit Justin Streit DL Eden Valley-Watkins | 2019 State MN (Eden Valley-Watkins) The Streit’s are one of the younger overall MN families of football, with their youngest Joshua coming in at the largest (6’8, 225) and the most highly recruited of the four. He holds a football offer from South Dakota State and is garnering interest from Iowa State. He also has basketball offers from Northern State, St. Cloud State, Cal-Poly, NDSU, Denver, and St. Thomas. His older brother Jared had a decorated career at St. John’s as a TE, and Jacob and Justin both currently play at Northern State University in Aberdeen, SD.

Ramaud and Kham Chiaokhiao- Bowman (Breck and Robbinsdale Armstrong) The Chiaokhiao-Bowman boys are both electric and highly-recruited wideout prospects from Minneapolis. Ramaud had an illustrious career as a Breck Mustang and has gone on to balling out at Northwestern in Evanston, Illinois. Most recently he had a gigantic individual performance against Wisconsin last week with a couple TD catches and a bunch of impressive snags. Younger brother Kham ended up playing for Robbinsdale Armstrong and shared a lot of his brothers traits as a polished route-runner with impressive burst, and this past season elected to take a post-grad year at St. Thomas More Prep School in CT. He currently holds offers from UMass, FAU, USF, Western Michigan, Central Michigan.

Logan and  Levi Richter Levi Richter 5'9" | DB Perham | 2022 State MN  (Perham) The Pride of Perham  Logan Richter Logan Richter DL Perham | 2018 State MN  recently earned his first snaps at the DL of the Minnesota Golden Gophers after a grayshirt year in-which a lot of adversity was needed to be overcame. His younger brother Levi is a quick and sure-handed WR who is a 2022 prospect for Perham’s high school football team.

Blake and  Brady Walthall Brady Walthall 6'1" | WR Moorhead | 2021 State MN  (Moorhead) The Walthall boys are twin 2021 wideouts for the #1 team in 5A in the Moorhead Spuds, where they have put up crazy high school statlines including almost 2,000 yards receiving for them both and nearly 50 TDs between the two. They are still undecided on where they will go to college, but will make for a dynamic and explosive duo if they do decide to sign together to play college football.

Sean and  Julian Diedrich Julian Diedrich 5'9" | RB Wayzata | 2022 State MN  (Wayzata) The stout and powerful Diedrich boys are Wayzata Trojan RBs and WRs and are both weight room junkies who like to make big plays on the gridiron for Wayzata. Sean is a 2021 prospect and Julian is a 2022, and they’ve enjoyed a couple seasons of playing together, including a big-school state championship in 6A last fall.

Eli and Monte Gillman (Dassel-Cokato) The Gillman boys are the most athletic pair of brothers in Dassel-Cokato, and older brother and 2022 prime recruiting target Eli is a natural playmaker who is being recruited by FCS and FBS schools alike. Younger brother Monte showed this season that varsity football is no match for him, and made some impressive plays out of the backfield for a freshman. They both could see themselves playing D1 football one day.

Sawyer and Simon Seidl (Hill Murray) A crazy athletic sibling pair of 2023 standout Sawyer and 2024 QB Simon who were both featured by national recruiter Tom Lemming upon his recent visit to MN to scout some of the top players in the state. They both have incredible speed and vision and are sure fire FBS prospects. Sawyer’s Hudl tape is unreal and Hill-Murray is set to make a lot of waves in the state coming up.

Jax and  Gavin Wysong Gavin Wysong 5'9" | LB Hills-Beaver Creek | 2021 State MN  (Hills-Beaver Creek) The 9-man pair of Wysong’s began their football careers in the Eden Prairie Youth Football Association but made the move to a smaller town and tore it up at the 9man level of MN high school football. Jax graduated high school last year after playing on the DL and OL of HBC, and Gavin has been lighting things up for the past couple years and putting up insane numbers as a QB/ATH for the 2020 #1 team in 9man. He’s going to make a great college signing for whoever lands him, and he’s gaining DIII and DII interest.

Eli and  Will Mostaert Will Mostaert DL Lakeville North | 2019 State MN  (Lakeville North) The Mostaert twins helped the Lakeville North Panthers win a big-school 6A state championship a couple years ago and were both named All-Metro and All-State after their senior campaigns. Both are playing DL at NDSU currently and are going to be big-time defensive playmakers from the DL for the Bison.

Logan and Mason Hofstedt (Cannon Falls) Another pair of brothers to go on and play for the NDSU Bison, the Hofstedt’s both play FB at NDSU currently after running over a ton of would-be defender for Cannon Falls in high school. They are a big pair of brothers.

James and  Andy Thomsen Andy Thomsen 6'3" | LB Grand Rapids | 2022 State MN  (St. Cloud Tech) Older brother James is currently a SS/LB for NDSU, and younger brother John is one of the top lineman in the class of 2022 here at PrepRedzoneMN. They are both thumpers and instinctual players who make the game of football look easy and are fun to watch.

Tyler and  Tayler Johnson Tayler Johnson ATH Minneapolis North | 2018 State MN  (MPLS North) The Johnson boys from the “low-ends” of North Minneapolis went on to have outstanding and accomplished prep careers for the North Polars and both signed to play D1 football out of high school. Tyler – as I’m sure you know – was one of the most prolific WRs in the history of the Minnesota Gophers, and his younger brother Tayler signed with UNI before transferring to chase his basketball dream of playing D1 ball at the next level. He’s at Western Nebraska CC right now playing JUCO basketball with the hopes of getting to the next level on the hardwood.

Graham and Johnny DeVore (Mahtomedi) The DeVore boys from Mahtomedi are a strong, well-built pair who had standout careers for the Zephyrs. Graham is currently a TE at UND and Johnny is a senior QB at Maht who is finishing his senior campaign and is being recruited hard by Sioux Falls. At 6’4, 210 lbs. there is a lot of positions he could play in college.

Gavin Bass 6'3" | LB Rosemount | 2023 State MN  (Rosemount) Another large pair of brothers come in the form of the Bass boys from Rosemount. Older brother Ian plays OL at South Dakota State and younger bro Gavin is a top 2023 recruit who plays LB for the Irish and has been a starter since his freshman year. Lot of good football coming in the future for these two.

Zach, Josh, and Nicholas Ojile (Spring Lake Park) The Ojile boys are a Spring Lake Park Panthers familial legacy who have played thousands of snaps for SLP over the years. Older brothers Zach and Josh graduated a few years ago and signed to play for UMD where Zach has made a ton of plays for the Bulldogs from his TE position. Nicholas is a 2022 DE who already has an offer from UMD but is receiving FCS interest and would be a great addition to the Missouri Valley. He’s a great basketball player to boot.

Eli, Noah, and  Owen King Owen King QB Caledonia | 2018 State MN  (Caledonia) The most accomplished siblings on this list forsure go to the King boys, who continue to write and rewrite the record books at the Minnesota’s best high school football program with the nations longest winning streak. Older brothers Owen and Noah play basketball at Winona State, but Eli is the #1 2022 prospect in the state and has over 15 FBS Power-5 football offers, as well as more than a few basketball scholarships. He’s a stud.

Marcus, Moses, and Mikias Alipate (Holy Angels) The Alipate boys were gigantic and hard-hitting prep prospects in MN who used their pads with violence. Marcus was more of a hooper, but Moses and Mikias both went on to sign D1 scholarships to Minnesota and South Dakota State, respectively. They were fun to watch play high school football.

Luke and  Sam Floysand Sam Floysand 6'3" | OL Cretin-Derham Hall | 2021 State MN  (Cretin-Derham Hall) Currently both in high school, Sam is a 2021 big-boy who is committed to Air Force, and younger brother Luke is a 2022 recruit who plays QB and could project as a TE at the next level. They’re an athletic pair and have done great things fro CDH.

Tag me on Twitter if I missed any prominent pairs of siblings from the world of MN High School Football! Happy Thanksgiving!