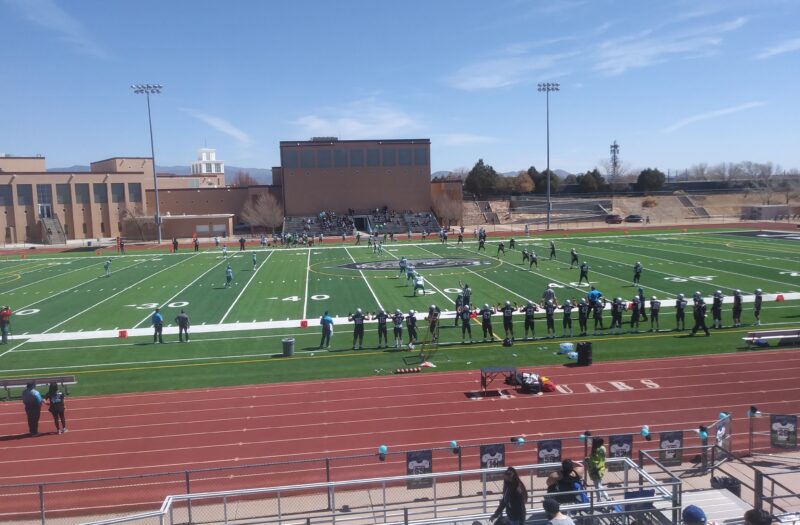 Week 5 of the once-in-a-lifetime (hopefully) abbreviated spring season is almost here and it could aptly be titled, “Bowl Weekend.” Some very intriguing cross-regional matchups dominate the slate. It all gets started Thursday afternoon at UNM Stadium in Albuquerque. So, we get three days of high school football. It should be an action-packed weekend for high school football fans around the state. After this, we’ll have to wait 4 months before we see high school football again.

Game of the Week: Cleveland vs. Las Cruces (Sat, 4 p.m. at UNM Stadium)

Had the season been played in the fall, this could have been the Class 6A state championship game. Both teams have emerged from the first four weeks of the spring schedule as two of the state’s best squads. Start with the quarterbacks: Jeff Davison Jeff Davison 5'11" | QB Cleveland | 2021 State NM and Marcos Lopez Marcos Lopez 6'1" | QB Las Cruces | 2021 State NM . Davison just wins but is underrated. Lopez is capable of taking over games by himself, as he did last week against Centennial. Both quarterbacks are playing the final games of their high school careers. Strong ground games power both offenses. Defenses? Yeah, they’re good too.

Farmington vs. Mayfield (Fri., 6 p.m. at UNM Stadium): Classic 5A matchup between teams on polar opposites of the state. Their offenses are also different. Unbeaten Farmington has one of the top passing attacks in the state led by quarterback Caleb Carrillo Caleb Carrillo 5'8" | QB Farmington | 2021 State NM (929 passing yards + 17 TDs in 4 games) and receiver Peyton Halliburton (17 receptions for 343 yards, 4 TD). Mayfield has a powerful running game led by Jose Montoya, who rushed for 168 yards and two touchdowns last week against Onate.

Rio Rancho at Goddard (Sat., 2 p.m. at Wool Bowl): Intriguing inter-classification battle between Class 6A and 5A teams. Both teams are coming off surprising losses to cross-town rivals in Week 4. The fact Rio Rancho lost to Cleveland wasn’t surprising, actually, but the final score was: 42-0. Goddard looked dominant in their first two games against Artesia and Lovington, but last week’s rivalry loss to Roswell shocked many. Which team bounces back and finishes the spring season on a positive note?

Roswell at Clovis (Fri., 7 p.m.): Roswell’s spring season threatened to go sideways after a stunning two-touchdown loss at home to Artesia on March 19. However, the Coyotes righted the ship with an impressive win over rival Goddard last weekend and look to be back on track. Losses to Cleveland and Rio Rancho had Clovis sitting at 1-2 before a satisfying 55-20 victory over Carlsbad last week evened the Wildcat’s record at 2-2. Jeston Webskowski Jeston Webskowski 6'0" | RB Clovis | 2021 State NM , headed to UNM in a couple of months, accounted for five touchdowns and 366 yards of offense.

Eunice vs. Texico (Fri., 2 p.m. at UNM Stadium): Appropriate the Game of the Year in Class 2A will be played at UNM’s Stadium, albeit on Good Friday in the afternoon. Both teams are led by talented quarterbacks. Eunice’s Hayden Dean has 660 yards passing and 334 yards rushing. Gabe Dickerman has led the Wolverines to a 4-0 start.

Eldorado at Cibola (Sat., 5 p.m. at Community): No team in New Mexico has played vastly different games like Eldorado. Their opener was a shootout 47-43 loss to Volcano Vista. Last week, the Eagles’ rivalry game against La Cueva turned to into a defensive slugfest with Eldorado prevailing 7-0. Cibola has played just one game, but they have the state’s top 2023 QB in and plenty of offensive weapons. Should be fun.

Lovington vs. Bloomfield (Thur., 5 p.m. at UNM Stadium): Speaking of high-powered offenses, Lovington brings one of the best in the state to UNM’s Stadium on Thursday afternoon. Senior Jared Jeffrey is a two-way threat. Bloomfield’s defense has been the main story for the Bobcats. Except for the loss to Farmington, Bloomfield’s defense has played very well. We’ll see if the Bobcats can slow down Lovington’s offense.

Alamogordo at Artesia (Fri., 7 p.m.): Alamogordo’s Sean Hays Sean Hays 6'0" | RB Alamogordo | 2021 State NM (468 rushing yards in 4 games) is one of the state’s top 2021 running backs. WR Braxton McDonald Braxton McDonald 5'10" | WR Artesia | 2021 State NM of Artesia will play at the next level. The Tigers make the trip through the Lincoln National Forest for the battle at the Bulldog Bowl.

Volcano Vista at La Cueva (Sat., 5 p.m. at Community): Volcano Vista’s defense has surrendered 92 points in the first two games, so the struggling La Cueva offense (blanked last week vs. Eldorado) might find some relief this week. Better late than never. If the Bears must get untracked offensively because slowing down the high flying VV offense led by exciting QB Johnny Herrera could prove challenging.

Piedra Vista at Capital (Sat., 3 p.m.): Capital RB Luke Padilla Luke Padilla 5'9" | RB Capital | 2021 State NM , his school’s all-time leading rusher by a wide margin, plays his final game for the Jaguars and will soon be off to Fort Lewis College in Durango, Co. Interestingly, all four of Piedra Vista’s games this spring have produced a shutout. Two up, two down. If you’re the Panthers, you’d better score some points because blanking Capital on their home field is unfathomable.

Other Games To Watch (Games Friday night unless otherwise indicated):

Schedule for the 5 'Bowl Games' to be played at UNM's Stadium in Albuquerque: pic.twitter.com/d5RQYG7mKX