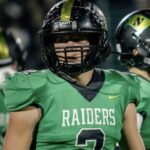 We’re staying in camp mode! But today, we’re on the defensive side of the ball looking at recruits who have had a great month of camps.

Boykin is a fairly good athlete with incredible length who can bounce around the backend of the defense. Fishers has primarily used him as an outside Corner and he’s thrived there. He’s got the ability to run with anyone and his length keeps him in some plays that it shouldn’t. Boykin has good closing speed and is never early. He’s got good timing and won’t get the yellow laundry thrown on the field. He’s shown that he can tackle in the open field and be the last line of defense. Right now, I do think he’s a bit raw but the upside is there. He’s instinctive, lengthy, and can run. His ball skills are decent and he’s going to take his shot at the ball when he can. His length allows him to defend passes and knock some down that he shouldn’t be able to reach. To this point, Boykin hasn’t been the flashiest DB but he’s consistent. He won’t get burned over

Ridge Howard 6'2" | LB Northridge | 2023 State IN - Northridge - LB/FB - 6’2" 200lbs Howard is a really good athlete who sees the field really well. He’s able to see the ball in some crazy windows, track it, and shoot through the gap to make the play. He’s able to run sideline to sideline and make tackle after tackle. He’s got an explosive first step and gets downfield rather quickly. When he’s blitzing, he’s got a nice second gear and can track down the QB. He’s got decently strong hands and is usually able to make every tackle with ease. When he’s back in coverage, he’s shown to be patient. He’ll watch the QB’s eyes and break on the ball in zone. In man coverage, he doesn’t like to let his guy get any space but there are times he can play a bit off. Howard just has a knack for the ball and making plays. He’s all over the field and will line up in different spots to keep the offense honest and guessing as well. As he develops and gets stronger, the bigger hits are going to come and he’ll become a potential highlight reel at the next level as well. On offense, he’ll block and lower his head. He’s got no issue clearing the way and trying to do what he can to help on the offensive side of things. When he gets the ball, he’s quick and nimble. He can be hard to bring down and will fight for every inch. While he’s versatile and is good at FB, he’s best on the other side of the ball and I imagine that’s where every school will want him, and they should. Howard is fun because he’s a tackling machine and is just scratching the surface of what he can be. If he comes out and has a big fall, you can expect the offers to pour in.

Subscribe to Prep Redzone Indiana to get access to all premium articles and prospect rankings for as little as $2 per week with an annual subscription!