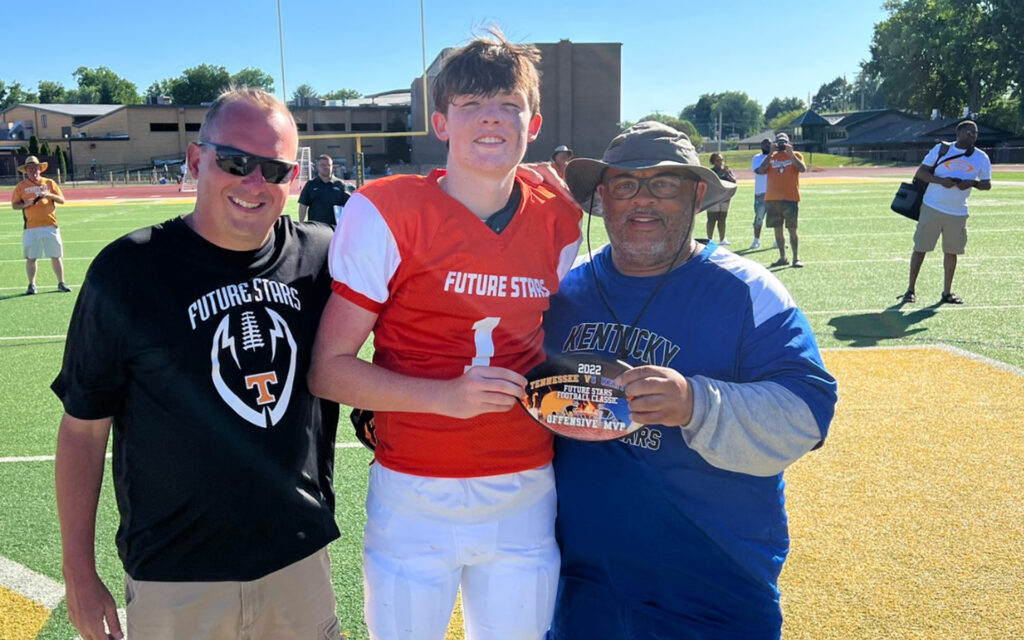 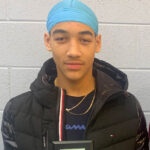 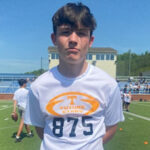 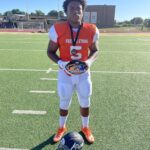 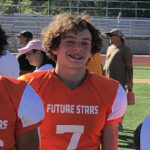 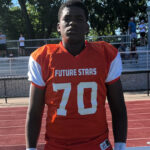 Measuring in at 6’4", 244 pounds, Humphrey caught my eyes right away. While his size is impressive, his play made an even bigger impression. He was very good in pass protection, showing impressive footwork and mirror ability. Humphrey was able to hold his own against one of the better defensive ends in this class in Cam Thomas. He was also able to be effective in the run game,

This past Saturday, I had the pleasure of getting to watch some of the top upcoming football talent from the state of Tennessee in the Tennessee Future Stars vs Kentucky Future Stars all star games. The third and final game of the day was the eighth grade game featuring prospects from the class of 2026. This was a very hard fought battle from start to finish with the Tennessee Future Stars coming back from behind to win the game in the final seconds. While there were many players worthy of receiving recognition, here are the prospects that stood out the most to me for the Eighth Grade Tennessee Future Stars. Charles Humphrey Jr. | Offensive Line | 2026 Measuring in at 6’4", 244 pounds, Humphrey caught my eyes right away. While his size is impressive, his play made an even bigger impression. He was very good in pass protection, showing impressive footwork and mirror ability. Humphrey was able to hold his own against one of the better defensive ends in this class in Cam Thomas. He was also able to be effective in the run game, using his length to his advantage to get extended on his man, giving him an easier opportunity to drive them off the line. Humphrey is a player that should definitely be on college radars as he begins his high school career. Kolby Barrett

Kolby Barrett 6'0" | ATH Alcoa | 2026 TN was a problem for opposing defensive backs all day on Saturday. He is a lengthy, athletic wide receiver that has great hands, no matter where he is on the field or how tight the coverage is. Barrett also showed the ability to do damage after the catch. He has the elusiveness to make defenders miss in the open field but also has the strength to run through tackles. Barrett had his name called on several key receptions and finished with a touchdown in this game. Briggs Cherry

Briggs Cherry 6'2" | QB Knox Catholic Youth | 2026 TN showed great leadership ability as a starting quarterback, willing the Tennessee squad to victory. He showed an impressive quick release with a ton of zip and solid accuracy in the short and intermediate passing game. Cherry also showed the ability to make big plays with his legs. He was showed great awareness to know when to escape the pocket when pressure was coming and was able to make throws on the run with ease. Cherry also was able to make something happen when tucking the ball and taking off as a ball carrier, as he ran in the game winning touchdown, making the extra effort to dive for the pylon with less than ten seconds left in the game. His play helped earn him Offensive MVP honors for the Tennessee team. Cherry showed me why he is already being highly recruited by Division I programs and holds an offer from Florida Atlantic. Kyrin Coleman

Kyrin Coleman 6'1" | DL Pope John Paul II | 2026 TN was a dominant force all game at the defensive end position. He plays with a very high motor, showing the ability to get to the ball t matter where the play is going. Once he gets to the ball, he is a very reliable open field tackler that finishes his tackles with a nice amount of physicality. As a pass rusher, he uses a combination of speed and quickness to beat the opposing offensive tackle off the edge. Kyrin was named Defensive MVP for the Tennessee team following his performance. Maverick Chance | Quarterback | 2026 While Cherry received most of the shine at quarterback for Tennessee, his backup impressed me when he was given his opportunity. Chance showed impressive footwork in his drops and great pocket presence. He also showed off a cannon for an arm. In his first drive, Chance connected on a very impressive long touchdown pass.   Caleb Lauderdale | Defensive Line | 2026 Caleb Lauderdale was another talented piece to an impressive Tennessee defensive front. He showed the ability to line up in multiple techniques and be effective in each of them. His quick first step allowed him to gain an advantage both as a pass rusher and when shooting the inside gap against the run. He did a great job of gaining penetration into the backfield and finishing his tackles with physicality once he got to the ball. Ethan Hill | Defensive Line | 2026 Hill was a third piece to the dangerous Tennessee defensive line. He truly wreaked havoc in the backfield all day on Saturday. Hill used his speed and pass rush moves to his advantage to beat opposing offensive tackles off the edge. Once he beat his man, he did a great job of finishing at the quarterback. I also loved the motor that Hill played with as he flew around the field all game, getting to the ball no matter where the play was. Jayzon Thompson | Running Back | 2026 Thompson had a very impressive game out of the backfield for Tennessee. He showed tremendous vision with the patience to let his offensive line work and open up running lanes. Once those lanes opened, he hit them downhill quickly. In the open field, he showed a great combination of power and elusiveness with the power to run through defenders as well as make them miss.   Tory Beaufort | Wide Receiver | 2026 After already receiving his first Division I offer from Eastern Kentucky at the beginning of this month, Beaufort proved himself worthy of that type of interest. He showed very good route running skills with quick breaks in his routes. Beaufort also showed the speed to pose as a deep threat as he can simply run by defenders. In the open field, he uses his combination of speed and quickness to pick up yards after the catch. I highly expect the offers to continue to pour in for Beaufort as he begins his high school career. Will Pressley

Will Pressley 6'0" | WR Oak Ridge | 2026 TN | Wide Receiver | 2026 Pressley was yet another dangerous offensive weapon for Tennessee that impressed me on Saturday. He showed that he is very reliable in both the short and deep passing game. In the short game, he has the ability to take a quick pass for extra yards due to his ability to make defenders miss in the open field. His speed allows him to create separation, making him a vert dangerous deep threat.