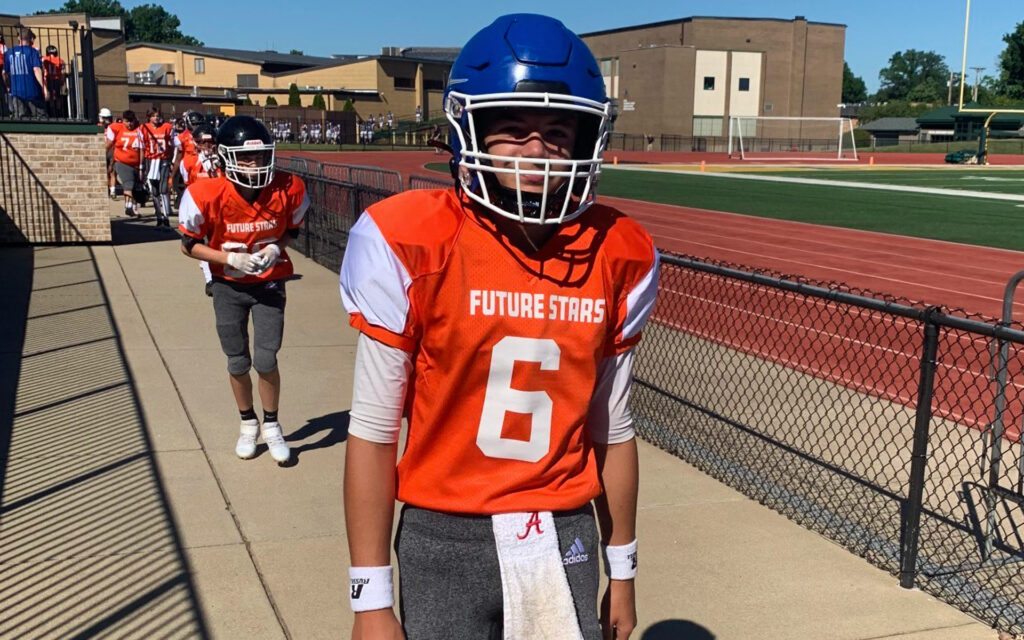 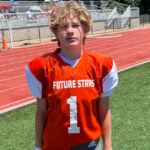 While Mock played on both sides of the ball, he stood out to me the most on offense. He worked mainly out of the slot and was a very reliable short yardage threat. Mock showed very reliable hands and did damage after the catch. His impressive combination of speed and the ability to make defenders miss helped him to turn a quick slant or screen pass into a big gain at any given moment. 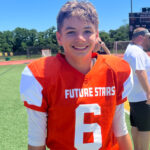 This past Saturday, I had the pleasure of watching some of the young upcoming talent from the state of Tennessee in the Tennessee Future Stars vs Kentucky Future Stars all star games. The first game on the agenda was the sixth grade game featuring prospects in the class of 2028. While the Tennessee Future Stars fell short in a 19-6 loss, they still had an abundance of talent on both sides of the ball on display. With that being said, here are ten players that stood out to me from the Sixth Grade Tennessee Future Stars. Nathan Mock | Wide Receiver | 2028 While Mock played on both sides of the ball, he stood out to me the most on offense. He worked mainly out of the slot and was a very reliable short yardage threat. Mock showed very reliable hands and did damage after the catch. His impressive combination of speed and the ability to make defenders miss helped him to turn a quick slant or screen pass into a big gain at any given moment.    Graham Simpson | Quarterback | 2028 Younger brother of current Alabama quarterback, Ty Simpson, Graham began to make a name for himself this weekend. Simpson showed impressive footwork and pocket presence with the ability to escape the pocket when needed. He showed great mobility with both the ability to tuck and run to pick up extra yards, and to keep his eyes down the field and deliver a strike on the run. Simpson also showed a very impressive deep ball with a great combination of arm strength and accuracy. His play helped him earn Offensive MVP honors for the Tennessee team.   Kam Morton | Running Back | 2028 I really liked what I saw from Morton both as a running back and as a returner on special teams. He broke off an impressive long kickoff return, using his elusiveness to make defenders miss in the open field. On offense, Morton showed great patience as a ball carrier. He used his vision to let his offensive line open up holes and as soon as he found a lane, he hit it downhill in a hurry.   Tommie Reed | Defensive Line | 2028 Reed wreaked havoc in the backfield all day from the defensive end position. He showed a quick first step as a pass rusher, using it to his advantage to get a first step on the opposing offensive tackle. I loved the motor that Reed played with, constantly looking for the ball and showing a great amount of hustle to get to it. Once he got to the ball, he showed that he is a very reliable open field tackler. Reed also showed great awareness, stripping the ball from the quarterback and returning it for a touchdown in the fourth quarter for Tennessee’s lone touchdown. After the game, Reed was named Defensive MVP for Tennessee.   Hendrik Degennaro | Linebacker | 2028 While he also got some reps on offense as a wide receiver, Degennaro did most of his damage on defense. His name was constantly announced over the PA system as he seemed to be in on every other tackle. He showed great ability to read his keys quickly and come downhill in a hurry to fill his gap against the run. When the play was away from him, Hendrik showed great effort to get to the ball and took very good angles. Once he got to the ball, he did a great job of securing the tackle and running his feet to prevent the ball carrier from picking up extra yards.    Jiden Butler | Linebacker | 2028 Tennessee was very fortunate to have a very impressive duo at linebacker with Degennaro and Jiden Butler. Butler was used more as an outside linebacker, even being used off the edge as a pass rusher. As a pass rusher, he showed impressive pass rush moves and a quick first step off the line of scrimmage to beat the opposing offensive tackle. He also showed a great ability to finish as a tackler, making the ball carrier feel him when laying a hit.   Dawson Head | Running Back | 2028 Head was used in many different ways for Tennessee. He is a big, athletic running back that has great vision. Once he finds the hole, he comes downhill and has the strength to break tackles. Even when he is going to be brought down, Head constantly had his feet churning to try to fight for extra yards. Along with his reps out of the backfield, Head showed that he could be effective out wide at receiver and as an inside linebacker on defense.   Aaden Adams | Defensive Back | 2028 While he is a smaller defensive back, I loved the fight that Adams showed against bigger wide receivers. He showed the ability to turn and run with receivers in man coverage and when the ball was thrown, he fought through the receiver to make a play on the ball. Adams showed great reaction ability to turn and defend the pass, not letting his receiver get in position to make a catch.   Gavin Strang | Quarterback | 2028 Although Simpson got the start and most of the praise, Tennessee had yet another solid quarterback on their roster in Gavin Strang. Strang was the taller of the two quarterbacks at 5’9." He showed impressive footwork in his drops and great pocket presence. Where he really caught my eye was throwing the deep ball, showing the ability to push the ball out there and place it where his receiver could get to it.